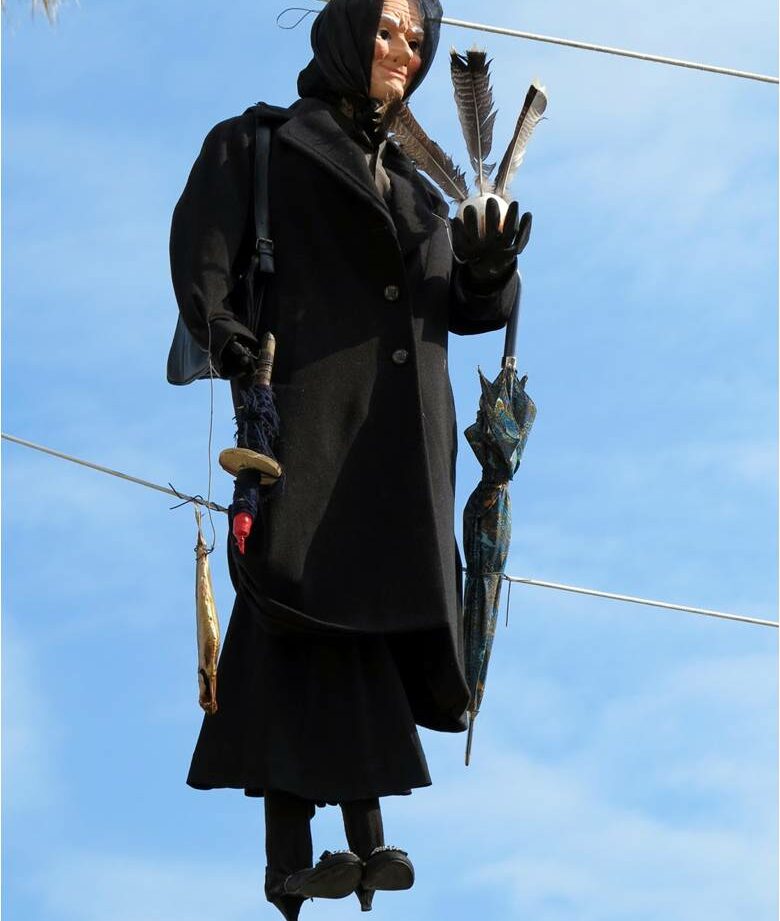 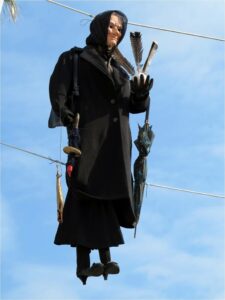 The “Quarantana” hanging on the street

In the days running up to Easter, if you take a stroll through the historic centre of some characteristic little town in Apulia, make sure to look up – suspended above you, you might glimpse the dark outline of a Quarantana, the figure of an elderly woman hanging lugubriously over the passers-by.

Dressed all in black, the Quarantana looks as if she is keeping a grim watch over the village, checking that everyone is complying with the rules for Eastertide. Her name (deriving from quaranta, the Italian word for 40) is an explicit reference to Lent, which for Christians evokes Jesus’ forty days of fasting in the desert and marks a period of moderation and penance after the revelries of Carnival.

But the Quarantana is actually a much older figure, imbued with symbols from pagan traditions that used to mark the course of agricultural life. In popular folklore, she is the wife of Carnevale, a prankster spirit whose death on Shrove Tuesday marks the end of festivities and games and the beginning of a period of abstinence and reflection. Dressed in black, in stark contrast to the cheerful colours of the carnival costumes, she carries both the tools of her trade – a reminder that the time for frolicking is over – and the spinning wheel, a symbol of the inexorable passage of life. She dangles from on high, rather like the “oscilla”, little terracotta sculptures in the shape of a head, mask or disc, which ancient Romans would hang from trees during the Sementivae, their seed-sowing festivals, so that, swaying in the wind, they would drive out evil spirits (and perhaps even birds), thus keeping the fields safe and ensuring a bountiful harvest. 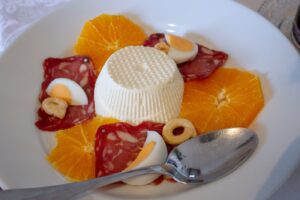 There are also a series of ornaments that vary from one town to another – she often holds an orange, symbolising the end of winter, into which seven feathers have been stuck, one for each week of Lent. In Valle d’Itria, meanwhile, the weeks are symbolised by seven taralli, and every Sunday of Lent one of them is removed. Another characteristic of the little towns in this area is the grater, a reminder not to eat cheese, even in pasta dishes, which during Lent are topped with breadcrumbs.

Cold meats and wine flasks also adorn the Quarantana – a reminder of the forbidden foods that will return as the main attraction on the Easter table. The Quarantana of Martina Franca also carries a pair of scissors for cutting out the tongues of offenders.

The ban on eating certain foods used to be so strict that, until recently, butchers’ shops in the smaller country villages were closed from Ash Wednesday to Holy Week, except for one day a week when, by order of the bishop, they could sell meat, but only to the sick. 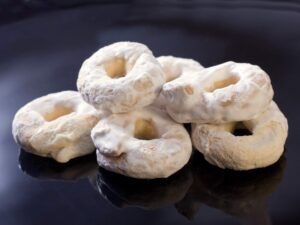 Eggs and milk were also forbidden: the milk was all turned into cheese, while eggs were kept, hard-boiled or raw, to be decorated or eaten, as a symbol of rebirth and new life, in the typical Easter Sunday and Easter Monday creations, such as u’ benedìtte , u’ verdètte, and la scarcèdde. In the recipe for one of the typical Easter cakes of the Itria Valley, called  pucciatidd pe’ l’ove ’nzuccaret’, eggshells were even used as measuring cups to get the proportions of ingredients right.

However, eggs were not always easy to find: hence the Holy Saturday tradition of “Sce cantè all’uòve”, typical of all the towns in the Valley and still very much alive in the Fasano area, when groups of young people would visit local houses and farmsteads, playing music and singing songs in exchange for eggs and other food.


On Holy Saturday, the Quarantana’s life would come to an end, blown up by firecrackers, or else set on fire by local farmers. The fire symbolised good fortune for the year – an end to the hardships of winter, and the beginning of a new season of rebirth.

We hope you are now looking forward to Easter in Apulia, to tasting our typical products and to meeting the Quarantana in person. The best way is to rent a trullo, experiencing authentic country life within easy reach of the most characteristic towns. Our trulli in Martina, Locorotondo, Fasano, and Cisternino are nestled in the Itria Valley, among the farmers and countryfolk who continue to honour the ancient traditions of Puglia. Listening to stories in their vibrant dialect, witnessing agricultural festivals and rituals, savouring our cured meats, dairy products and cheeses prepared on the premises with the same care as a hundred years ago, is an experience you will find hard to forget. 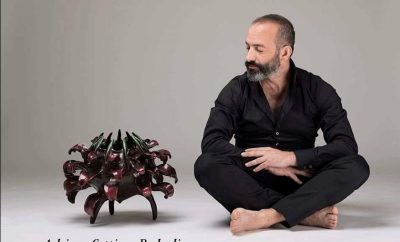 Artisans and Artists of Pugl...
Puglia is a region for going on enchanting walks and unforgettable holidays, but it’s also a place of talent, which ...
Category: Experiences 0 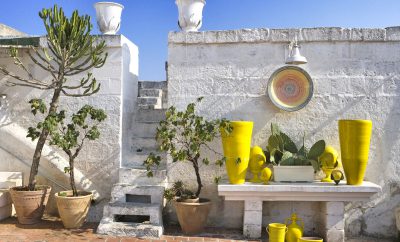 The Fires of Grottaglie
I reckon nothing will be happening tonight, because she’s not deigning to look at me.  But to see her here ...
Category: Destinations and Itineraries, Experiences 0
We use cookies to track usage and preferences. If you keep on browsing this site, you agree with our cookies policy. Read more about cookiesOK
Privacy & Cookies Policy