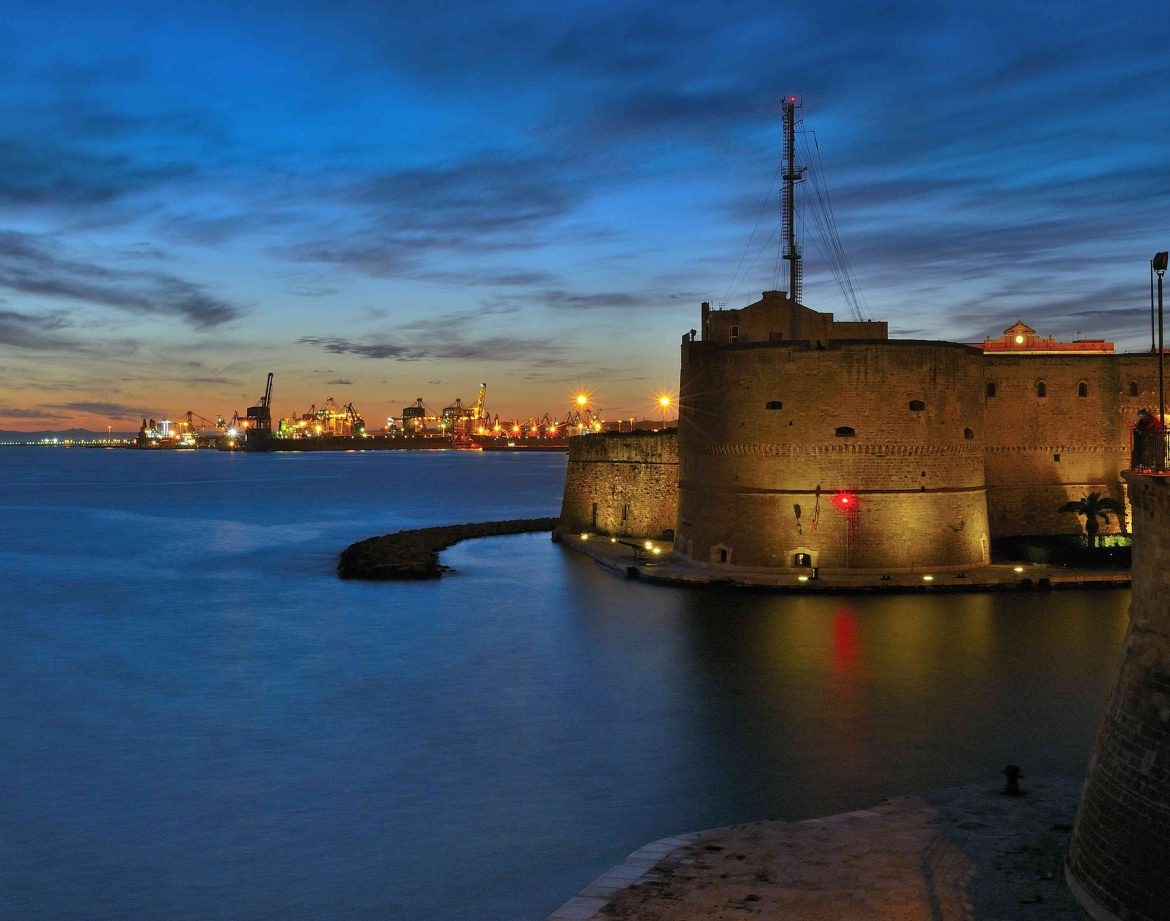 Taranto the city of the two seas

Posted by the staff of TrulliOnline


Taranto is one of the richest cities in Puglia in terms of history and natural biodiversity. The city itself lies on the Ionian Sea and is known as the “City of the Two Seas” due to its geographical position straddling two stretches of water: the Mar Grande and Mar Piccolo.

The Mar Grande is separated from the Mar Piccolo by a canal crossed by a swing bridge. In the Mar Piccolo, divided into two basins, there are underwater springs known as Citri, which pump a mixture of fresh and brackish water into the harbour, thus creating ideal hydro-biological conditions for shellfish, including Taranto’s famous cozze nere, the mussels served in restaurants throughout the town.

Your first stop in Taranto, though, is the old city, with its reminders of the Greeks, Romans, Normans, Saracens and Spaniards who landed here in different eras, building a city of great splendour, as can be seen at MArTA, the prized National Archaeological Museum, where exhibits include the famous gold pre-Roman jewellery known as the Ori di Taranto as well as some outstanding mosaics.

You can take a stroll along the main street of the city centre, and go shopping along streets beneath the branches of orange trees, bearing fruit even in summer. They are a wonderful sight among the modern apartment blocks, alternating with Littorio style buildings. Or else, you can have a refreshing walk along the seafront, or read a good book sitting on a bench in the terraced gardens, divided up into colourful flower beds overlooking the sea, brightening up the city throughout the day; this is also one of the finest places to enjoy the spectacular sunset.

One of Taranto’s unique features is the swing bridge between the island of Borgo Antico and the peninsula of Borgo Nuovo. Originally an arched bridge made out of wood and iron, it has now been replaced by two arms that swing open, allowing ships to pass through.

Next to it, the imposing Aragonese Castle was built on the site of a Byzantine Fortress, which was subsequently enlarged during the Middle Ages and the Renaissance period. Today it is occupied by the Italian Navy which provides guided tours of the interior held by cadets.

The beautiful Cathedral of San Cataldo, the oldest cathedral in Apulia, was built in the tenth century and combines Byzantine, medieval and Baroque architectural features.

Taranto also houses the amazing Spartan underground museum known as Ipogeo Bellacicco, in the chambers below Palazzo de Beaumont Bonelli, which documents the historical periods all the way from the foundation of the city by the Spartans (8th century BC) until the 17th century. You can also take a look at the fossil remains of mussels set in the limestone rock.

After visiting the city, the beach at San Vito is a great place to unwind, have a swim and sit back in one of the restaurants and bars overlooking the sea.  Other beautiful beaches are just a few kilometers away: San Pietro in Bevagna near Manduria, with its stunning dunes and white sands, and Punta Prosciutto, further south, famous for its crystalline waters.

Nature lovers also know Taranto as a “dolphin paradise“, due to the large population of cetaceans to be found off the Cheradi Islands, which are easy to spot on one of the exciting boat tours held by the Jonian Dolphin Conservation.