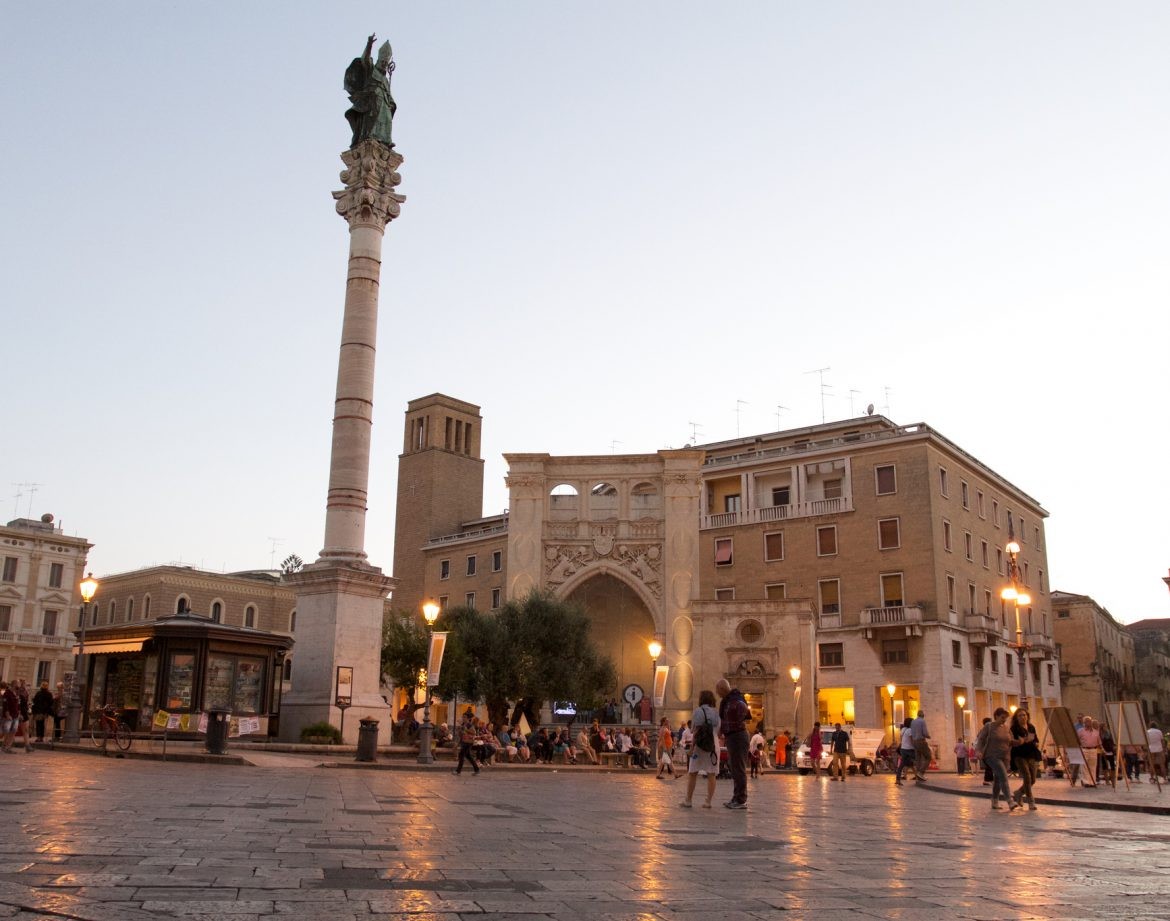 As we walk beneath Lecce’s Renaissance-era Naples Gate, built in honour of Holy Roman Emperor Charles V, into the alleyways of the old town, it feels like the city is made out of burlap and lace.

The encrusted walls of various buildings, the unkempt atmosphere of seemingly forgotten corners, the fragrances of the alleyways in the old city, all leave us with the feeling that life is genuine and generous, adorned with the beauty of the stone decorations.

We are dazzled by the friezes on the portals, whose peerless splendour not even layers of dust can conceal.

Michele squeezes Milena’s hand as they stroll along, because he now understands where her straightforward temperament comes from, which makes it so impossible for her to tell a lie: she was born in this city.

She smiles as they eat a bocca di dama, the little cake that looks like a woman’s breast covered with white icing and topped by a cheeky cocktail cherry. She promises they’ll try some Lecce pasticciotti and that he’ll never be able to forget the taste.

As they walk along, she points out the refined Baroque façades and the wonderful Adorno Palace. They get to the Basilica of Santa Croce, the most tangible symbol of Lecce baroque, in which the master stonemasons left their impressive mark, earning this Salento city the nickname of Florence of the South. 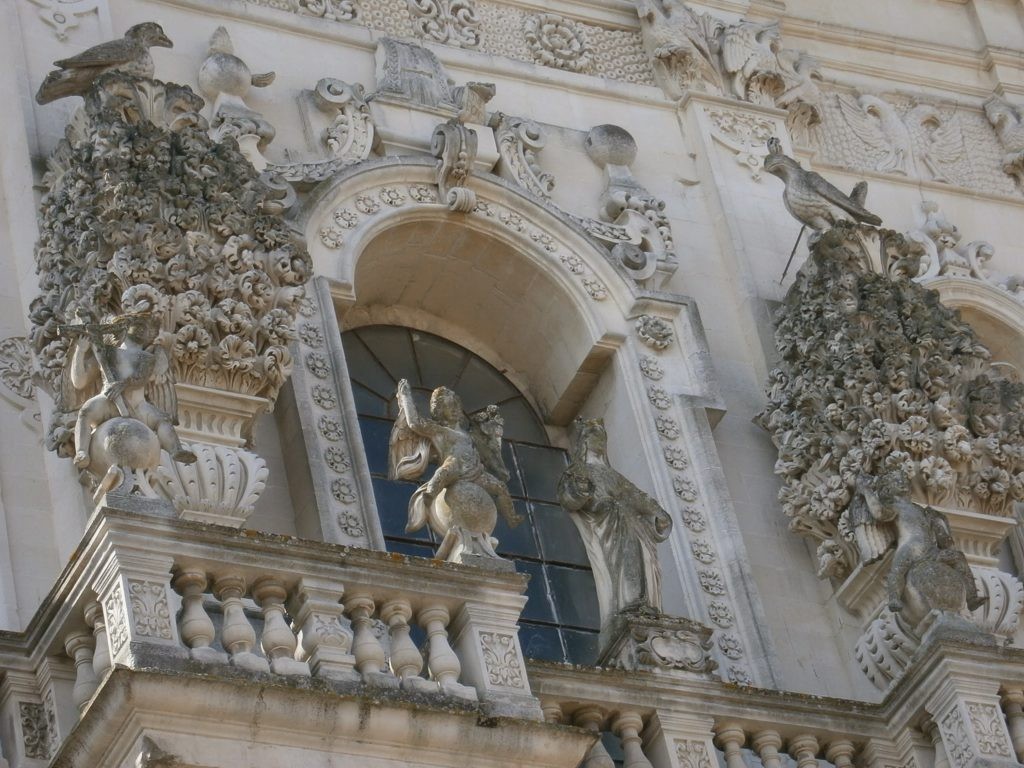 She tells him Lecce is a city of ancient origins, which enjoyed two different heydays – one during Roman times and the other under the Kingdom of Naples, its imaginative sculptures hewn out of the soft local Lecce Stone. And she talks about it with such pride that her eyes start to glisten.

They head towards Piazza Sant’Oronzo, the pulsating heart of city life, because she wants to kiss him at the foot of the column on which stands a statue of the Patron Saint. She had promised her grandmother that as soon as she’d found love, she would bring him there to be blessed by the Saint as they kiss, just as her grandmother had once done with grandfather.

The scenic Piazza del Duomo with the gorgeous lateral façade of the Cathedral, the majestic belltower, the 15th-century Episcopal Palace with its angular arched loggia, the 18th-century Palace of the Seminary: everything about this city fascinates Michele, who is awestruck for minutes at a time as he gazes at the Roman amphitheatre, a splendid relic from the 2nd century AD 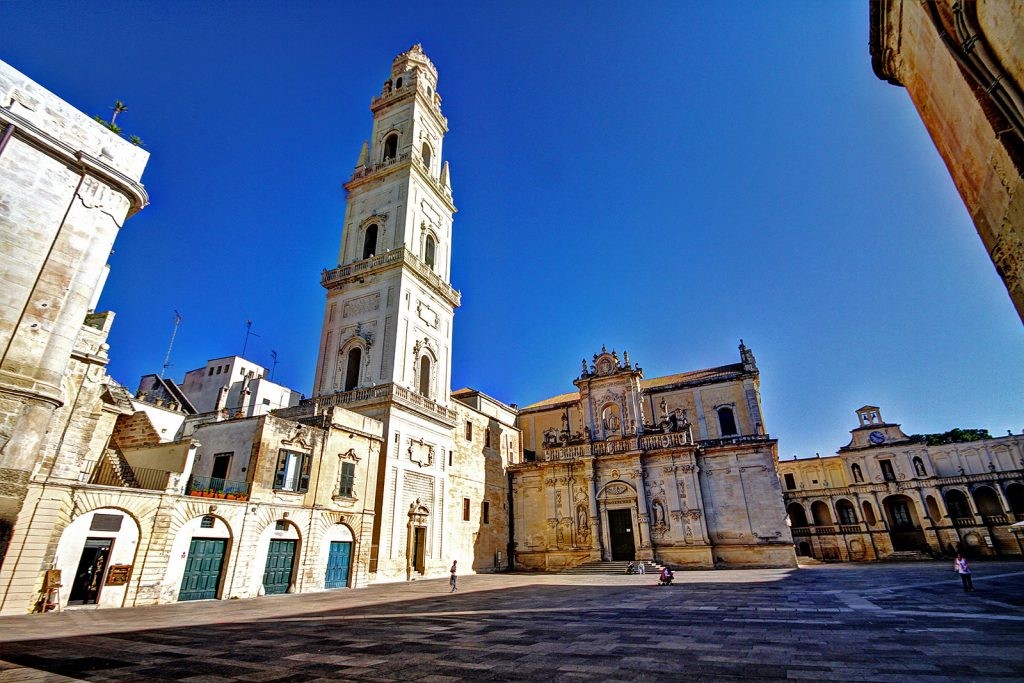 He’s enchanted to hear Milena telling of how as a little girl she walked into the middle of the square to rub her feet on the she-wolf, the lucky charm also displayed on the coat of arms of this city known to the Romans as Lupiae.

And as they embrace at the foot of the column, turning that hug into the promise of a lifetime together, Milena kisses him and whispers: <<Lu sule ci te ite, te scarfa!>>. If the sun can see you, it warms you.