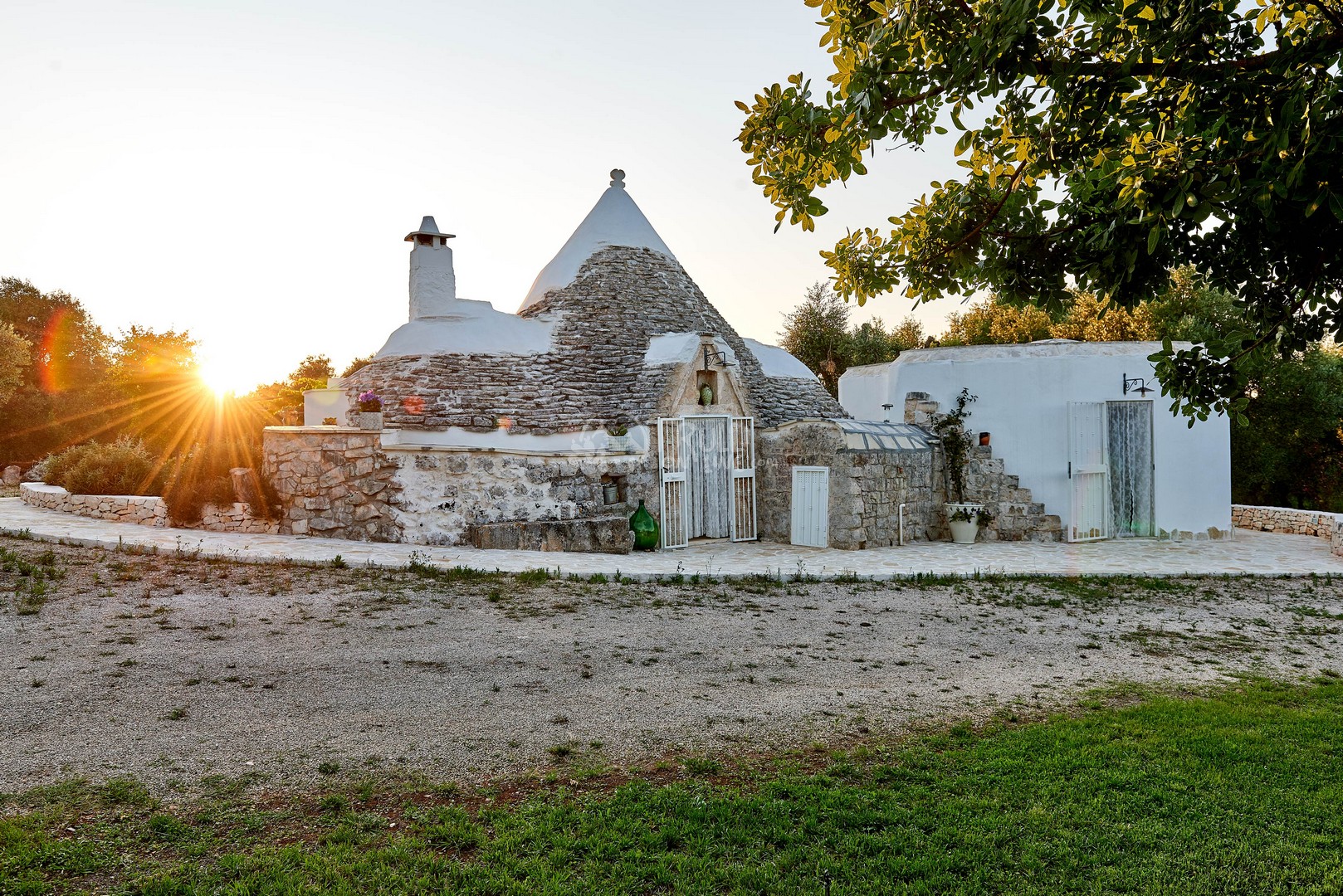 Trullo Japigio owes its name to the ancient tribes who first settled the Apulian peninsula many centuries ago. Strategically located between the Ionian and Adriatic Seas, it is situated in the heart of the Itria Valley, between Ostuni (the so-called White City), Martina Franca and Ceglie Messapica. In its dominant position nestling among centuries-old olive trees, with a stunning view of Cisternino, it is just a few kilometres from well-known sightseeing towns such as Alberobello (the trulli city), Locorotondo, among the most charming hilltop towns in Italy, and Lecce, the capital of Apulian Baroque.

Trullo Japigio is made up of two independent residential units with central heating and can sleep up to six people.

The larger unit consists of a living area and a sleeping area. The living area consists of a large, bright room with kitchenette, furnished in keeping with rural character while offering modern amenities, such as a washing machine, TV, fireplace, large sofa and a beautiful window overlooking an expanse of olive and almond trees. The sleeping area, inside an ancient trullo made up of three cones, consists of a large comfortable bedroom with a queen-sized sofa bed which will comfortably sleep two children. The living and sleeping areas are equipped with a practical bathroom with shower. As befits the local tradition, the bedroom is built entirely out of stone which ensures that it stays cool on those hot summer days.

The second unit, which originates from what was once a stable for horses, has a separate entrance and consists of a double bedroom and bathroom with shower.

The outdoor areas are equipped with every conceivable amenity, with a 4 x 10 metre swimming pool, a table, a gazebo offering shade, a barbecue and a hot shower. The lush, rolling countryside with its typical red soil and numerous fruit trees - cherry, fig, pear, plum, olive and almond - creates the delightful setting in which the trullo stands. Throughout the year, you will be able to savour the intense flavours of the local produce.

Trullo Japigio will enable you to spend your holiday in Apulia, surrounded by nature, in a peaceful green setting, with a beautiful swimming pool for your exclusive use without having to share any facilities with neighbours. Take time to discover the myriad beaches, ruins, woods, farms, wine and food itineraries and to enjoy long walks, bike tours or horse rides. The trullo is within easy reach of the enchanting beaches on either the Ionian or the Adriatic coastlines. Within a few kilometres, there are many places of natural interest such as the Torre Guaceto Natural Protected Area or the Coastal Dunes Regional Natural Park (or Parco naturale Regionale delle Dune Costiere in Italian). This trullo is the ideal place for anyone looking for peace and quiet, clean air and a country holiday far from the madding crowds of the city.