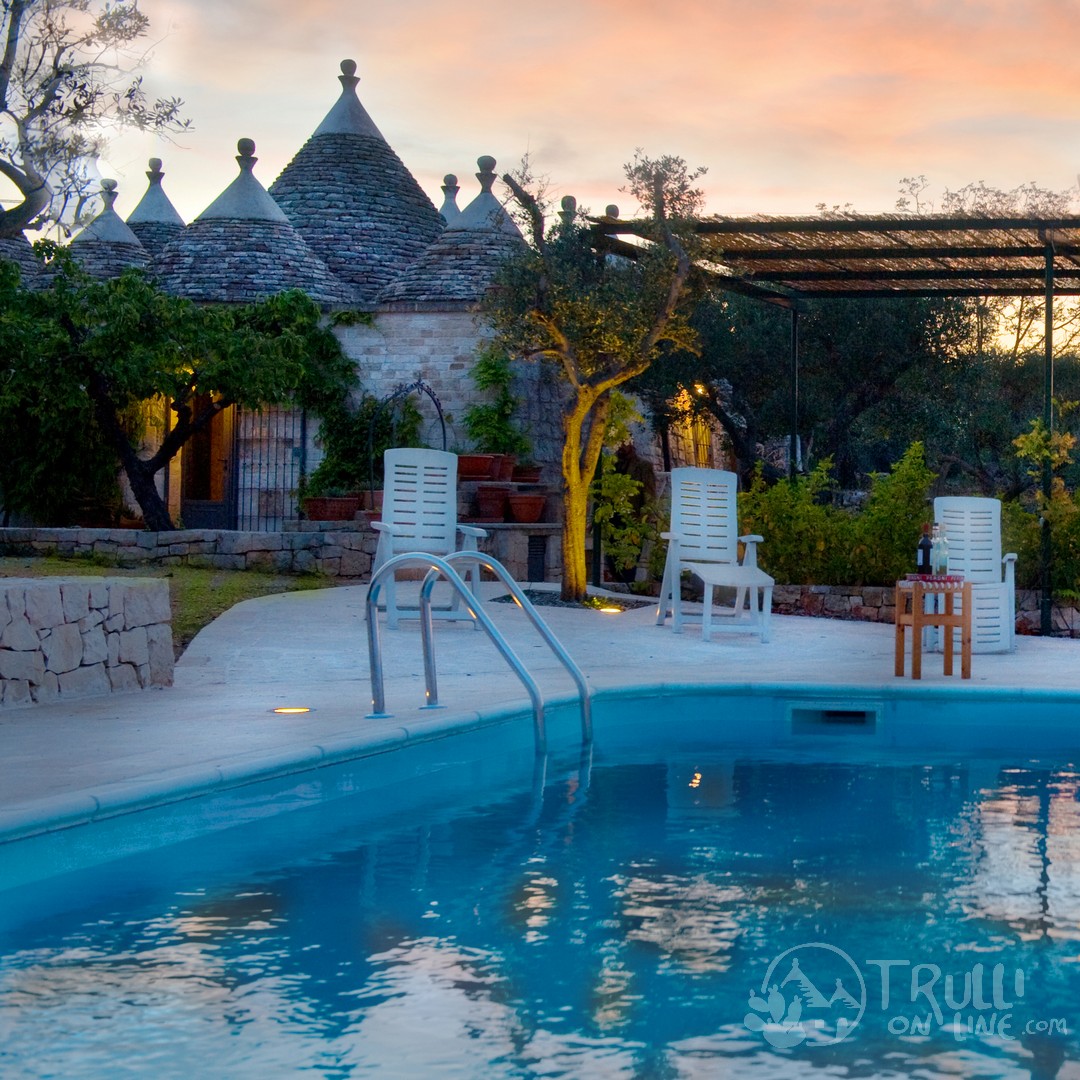 In the tiny hamlet which lies between Locorotondo and Martina Franca, just a few kilometres from the sea and the main tourist attractions in the area, Trullo di Ettore is a place of peace and tranquillity for all those wishing to spend a holiday as far as possible away from the pace of city life.

With its four independent bedrooms, two bathrooms, one living room with kitchen and large fireplace, this trullo can sleep up to 9 people, in an atmosphere where the countryside reigns.

For those looking for serenity, lovers of silence punctuated only by the sounds of nature, Trullo di Ettore is set in an ideal location. At the back of the house, olive groves stretch as far as the eye can see, which is why the two open-air showers have been placed on that side of the trullo. Once made up of two separate buildings, and ancient stable and a rural dwelling, which have both been refurbished according to the ancient tradition, with stone and plaster interiors and a pleasing combination of arches and wooden beams.

To cap it all, eleven cones with skylights, making the trullo bright throughout the day. Cool, in the summer months thanks to the thick walls which isolate it from the heat, warm throughout winter with radiators in each room and its large fireplace, Trullo di Ettore also has a large garden, with a terrace outside the entrance and a dining area with a table, wooden benches and an inviting brickwork barbecue.

The front door opens stright into the living room, a large space with a table seating eight people, and a well-furnished kitchen with french windows leading out into the country, which can also act as a second entrance. To the right, the single bedroom, a delightful little trullo, a really snug place to take a rest. Also, an area beneath a stone arch contains one of the two fully equipped bathrooms, and to the right a double bedroom, with a spacious wooden built-in wardrobe and a window overlooking the countryside, right above the head of the bed from where you can watch the dawn rising.

To the left of the living area is the second bathroom, with its stonework barrel-vaulted ceiling, again fully equipped together with a washing machine; the two double bedrooms, each with a built-in wardrobe and chest of drawers, and at the end, the fireplace with sofa and armchairs, ideal for whiling away the evenings, for reading, for watching television or for enjoying the company of a living fire.