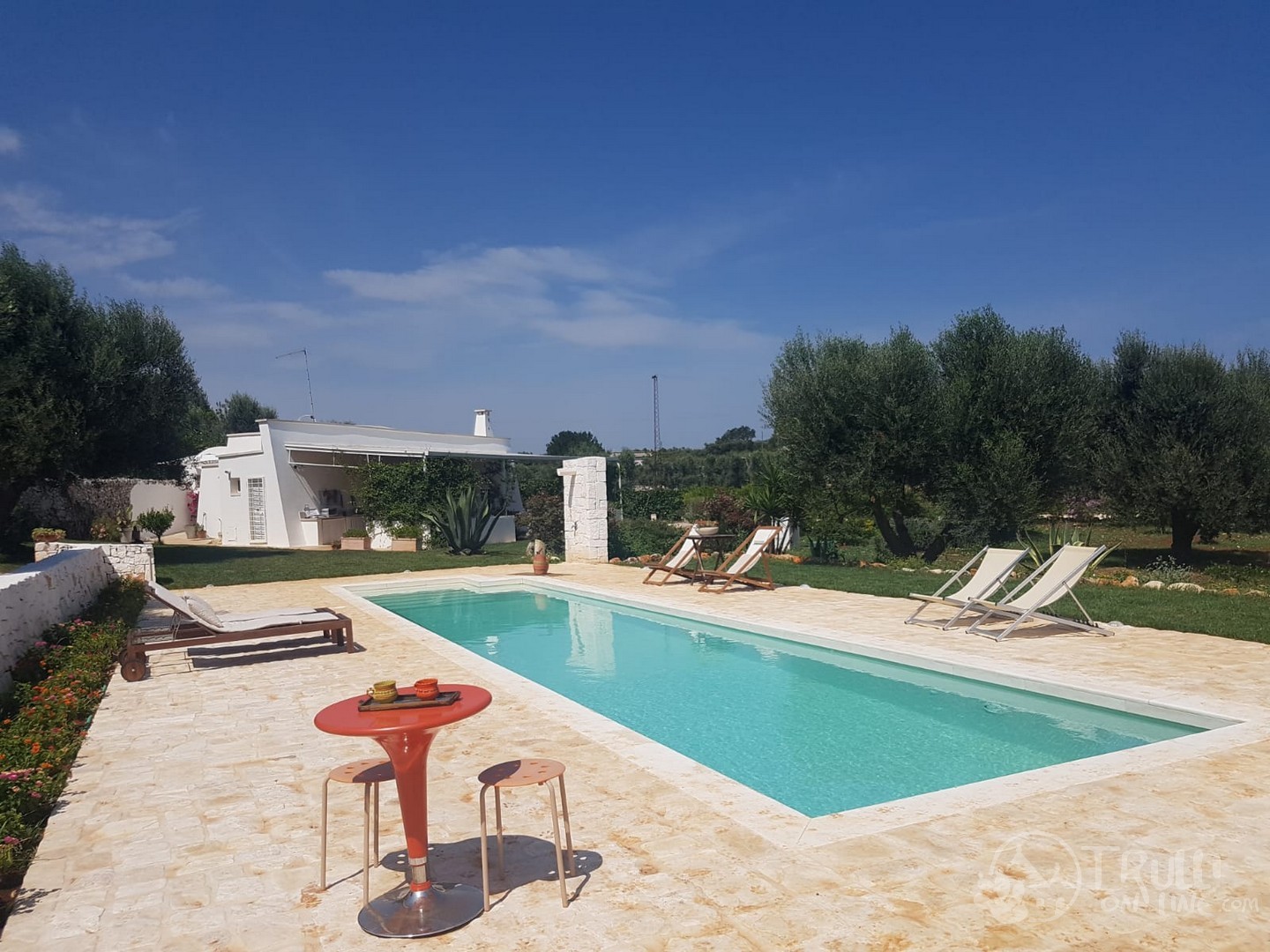 The holiday home Casa di Chicca e Titti is a typical stone ancient Lamia with saracen vaulted ceilings built at the early '900 by a local family.

Originally it was a "palmento" a structure, surrounded by 1 hectare of vineyard, used for the production of wine by the inhabitants of the Itria Valley who stored the must, obtained from grape pressing, in tanks dug into the stone.

Casa di Chicca e Titti has been recently recovered and elegantly restored with respect to the environmental and architectural features.

Casa di Chicca e Titti is surrounded by an hectare of Mediterranean maquis, olive and almond trees which provide peace and perfect relax. The house is equipped by seven beds and may be occupied entirely or in part because it is composed by two units: the Lamia (ancient Palmento) and the Dependance.

The Lamia has 2 double bedrooms, 1 living room, 1 alcove with single bed, 1 bathroom with shower, 1 Kitchen equipped with dishwasher and everything you need, 1 living and a large patio outside.

The Dependance consists of 1 comfortable bedroom, 1 bathroom with shower, a fully equipped kitchen and a small but cozy patio outside. During the summer, the interior of Casa di Chicca is completely fresh thanks to its thick stone walls. That's the reason why these stone structures (Lamie) were originally used as summer residences!

In common to both units: car parking, external storage room with washing machine, comfortable outdoor shower with hot water. The structure is protected by alarm system connected with Police Supervision. The stucture is provided with all the bed and bathroom linen and kitchen cloths ... and with mosquito nets.

Casa di Chicca is proud to host your dogs outside in a covered pen equipped by a masonry bed. We are a few minutes from the town of Ostuni, in Contrada Foragno, a wonderful rural area which takes its name from a rare oak, whose origins are to be found in the Balkans. Fragno oak grows only here, in northern Greece, in the former southern Juvoslavia and Macedonia.

In this contrada there are several old farmhouses and villas dating back to the early '900. Here you can enjoy the quiet of the countryside and the scents of the Mediterranean. you can reach in a few minutes some of the most beautiful beaches on the coast of Alto Salento and i the most beautiful towns in the heart of the Itria Valley: Cisternino, Locorotondo, Martina Franca, Alberobello (UNESCO World Heritage since 1996). You can also visit Polignano a mare located on a steep rocky cliff overlooking the Adriatic Sea.

Swimming pool included from May to October
Heating: 15 euros per day
Deposit: 300 euro